We have been invited to attend a reunion of several family lines — Bolton-King-Beck-Klemm-Grootten — in  August, in Narva-Jõesuu (formerly Ust’-Narva, formerly Hungerburg), Estonia.

Pictured here is our grandfather Orest Maximillianovich Groten (Grootten), with daughter Tanya (Olga’s mom) and wife Ludmilla. You can see Orest’s father as a boy in the picture below.

Here is some more information about the family, sent to us by Victor Minakhin, a  cousin who has done much research on the family line:

Around 1780 two brothers from the city of Kingston upon Hull in England came to the Baltic provinces of Russia as merchants. Their names were Richard Thorley Bolton and Robert Bolton.

Richard became a well known merchant in Narva and Robert in Riga. Both married local ladies and had numerous offsprings.

Robert Bolton died in Riga in 1807 and his widow moved to Narva where some of her children were living. Richard Thorley Bolton died in Narva in 1818.

The Bolton name is a very ancient one in England. It goes back to the 11th century.

The idea of the Reunion was suggested by the following line of the descendants:

Their daughter Maria Beck in 1845 married Oscar von Klemm who was born in Mitau (now Jelgava, Latvia) and later became a full General in the Russian Army.

Their daughter Olga von Klemm in 1874 married Maximillian Grootten, an engineer from St. Petersburg whose grandfather came to Russia in 1760s from Hamburg and whose ancestors probably arrived in Germany from Holland.

The picture below if of their silver wedding anniversary in 1899.

Olga Cantrell’s grandfather Orest (pictured above) is the son of the boy at right in the picture. 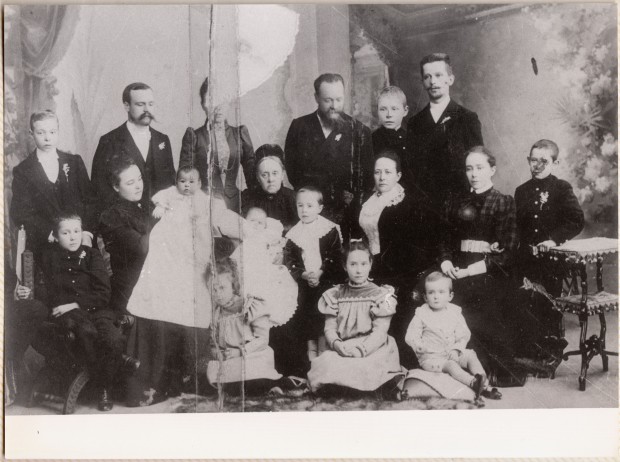 Orest’s father – Maximillian Grootten (above at right) had thirteen siblings.

The youngest sister of Maximillian, i.e. one of Orest’s aunts was called Adelaide (“Adia”), seen above, front row at left.

She was married in 1912 to a well known expert on hydrobiology Professor Dimitry Beling who headed a research institution in Kiev. Germans made him to continue in this position after they occupied Kiev during WW2.

When the Soviet troops were close to liberating Kiev, Germans evacuated Beling to Germany. After the war he and Adia worked at the Goettingen University and lived in West Germany.

Their daughter Helena Beling remained in Leningrad amd married Vadim Regel of famous St. Petersburg German family. They had two children – a son and a daughter.

In 1960 Adia started to commute between Goettingen and Leningrad often staying with her grandchildren.  Although a West German citizen – she died in Leningrad in 1989.

Her ashes were buried in Goettingen. A large part of Adia’s archive is preserved by the Regel family now in St. Petersburg.

Special thanks goes to Victor Minakhin for compiling this information and being the force behind the gathering of the family in Estonia in August.