Here is another personal testimony from our church, Street Cry, in St. Petersburg.

Liza Bachi, 26, recently received her medical degree from a University in St. Petersburg and works as a cardiologist in Mariinskaya hospital of St. Petersburg. God often moves through her in the gift of healing.

She has a heart of compassion and love, which moves her to intercession for the poor, needy, sick, for people who do not know Jesus yet. She is a big blessing for everyone she comes in contact with. Here is her story: 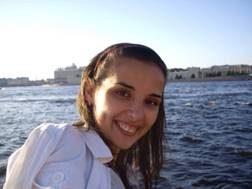 I initially accepted Jesus in 2001 at the age of 17. Growing up in a Jewish family, I knew religion as a set of rules to obey. But when I began to ask myself questions like “Who is God? Why do I live?” that set of rules did not give me any satisfactory answers.

But one day my close friend Nastya Tsarevskaya (see her testimony in November 2008 issue of our newsletter) told me that she became a Christian. I saw drastic changes in her and wanted to know more about it. Thus, I ended up going to her church. Once the service ended in an altar call for repentance – I came out and prayed the sinner’s prayer led by the pastor.

Still for quite a while, I stayed religious as opposed to having a vibrant personal relationship with God. May be because I was always a good girl and even after praying the sinner’s prayer, I did not have an understanding that I cannot live Godly life by my own strength. Time went by.

I attended church, prayers, outreaches – because it was proper. Not even noticing how I was turning my newly found faith into just a set of new rules to obey…

At the same time, I studied medicine in a university. One guy in our group was direct opposite of me. I was a believer – straight, good and righteous and he smoked, drank, partied and skipped lectures more often than not… Nevertheless, we kept company and were buddies for a year and a half. Sometimes looking at him, I thought that he was leading a more honest life following his basic instincts than I did trying to obey my rules. END_OF_DOCUMENT_TOKEN_TO_BE_REPLACED