Here are a couple of recent videos of Valerie.

By the way, she’s doing great. Beth Shanklin, a good friend who is a neuro-developmentalist, visited recently from the US. Beth assessed Valerie about a year ago and wrote a program to address some developmental issues. Olga has been faithful to do the program over the months.

Beth checked Valerie last week and Valerie is almost at her age level developmentally, with just a few small issues. Remember, just over a year ago Valerie said about three words (at age 3). She’s really catching up, speaking more and more English, too.

We went to a park:

And today she did something really great. I’ve set out my small travel hammered dulcimer for her to plunk around on, hoping she’ll take interest. I showed her how to play the Alphabet Song (she doesn’t know it as Twinkle Twinkle yet). Today, after some rough starts, she did this:

Here is a favorite Russian tune, in a great setting —

This is a Russian Soviet wartime song about a girl longing for her beloved, who is away on military service. The music was composed in 1938 by Matvei Blanter and the lyrics were written by Mikhail Isakovsky. It was first performed by the celebrated Russian folk singer, Lidiya Ruslanova.

I met Paulina during the summer of 2000 in one of the non-ambulatory wards at the children’s home in Pavlovsk. She is ten years old, with severe cataracts–as far as I can tell she can see when the light changes but can not see any distinct forms. She does not speak; she does not walk; she is not able to bathe or feed herself.

When I first saw her, she was sleeping, all curled up with her arms over her face–closed to the world. I sat next to her and began to play the guitar. She heard the music and was at first unsure how to respond, then she broke into a very large smile and stretched her body out in a very graceful way. I think she would have been a ballerina if she did not have her disabilities. Her response to the music was wonderful to see. Then, she reached out to me and pulled my hand toward her and held it against her chest for a long time. It was an honor and a pleasure to pray for her as she held my hand. I prayed for her spirit to be at peace, I prayed blessing on her. I prayed that she would be great in the kingdom of heaven, since she is so “low” here on earth. That is the way God has built creation: those who are last shall be first. 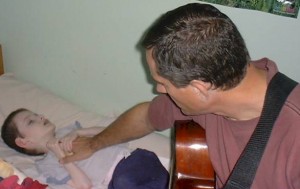 I went back to visit her at every opportunity. The second time I played for her, I moved the guitar so that it touched her body–this allowed her to feel the resonance of the instrument. She reached out to the guitar and held on to the instrument to feel, as well as hear, the music. God has given me comfort through this music, and I know He also comforted Paulina as I played. Even though we don’t share a language, and she can’t see my face, the music connected us–two people connected by a gift of God. This is a very holy thing.

The Austin team has provided supplies to help her as she lives in the orphanage, but just as important is our being there to serve her through human contact, by loving her. The workers there do the best they can–they obviously care for the kids, but the work is overwhelming for them, and they can not give each child the attention a person needs; we are called to love them with the love of God.

Paulina is one of 140 children in the non-ambulatory wards at the orphanage. Please pray for her.

Update: I visited Paulina three years after first seeing her. She is growing!! The nurses at the orphanage say that she loves music! She is blind and does not speak, but at least she is now able to sit in a chair and move some. When I first met her, she was bedridden. I’m not sure how much she can understand around her. Both of her grandmothers visit her, but her parents now live in New York–they’ve abandoned her because of her disabilities. To think that she’s been in this orphanage since she was a baby, and she’ll be here until she turns 18 and is sent to an adult facility.