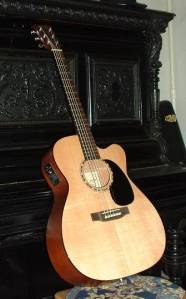 Many of you know that I love to give away guitars when I come here. So, on almost every trip I’ve made I brought a guitar to be given to some person or group who needs one. I’ve given one to an orphan named Vanya, I gave one to an orphanage for street kids, and the last one was given to my church, Street Cry. They have a great music ministry (doing concerts on the streets), and they needed a nice acoustic guitar. I was going to sell mine to them (they offered to buy it), but just as we came to the time to “talk money,” I felt the Spirit tell me to give it to them.

A friend once told me, “The Kingdom of God is not about buying and selling, it’s about giving and receiving.” When I gave the guitar to John Russell at Street Cry, he said “God is gonna bless you.” I thought, “well, OK, whatever” and didn’t really want to presume about what the Lord was going to do. After all, we don’t give to get.

The place I buy my guitars is a classic store in Austin run by a classic-looking old feller named Ray Hennig. He’s been in the guitar business for 40 years, and he’s known as a tough, crusty businessman. When I bought my first guitar from him last year, I told him what I was doing: working as a Christian in Russia, planning to give the guitar to an orphan. He said, “you have touched my heart. I love kids, and I love the Lord.” I was dumbfounded, but super happy. After giving away the first guitar, I was able to give him a picture of Vanya playing the guitar he sold me. Since then, Ray and I have shared our faith with each other when we’ve met. One time when I was in Austin, I felt that I should have a good, concert quality guitar here in Russia. I don’t want to be carrying my good guitar back and forth to America. So, this time I came looking for a very good guitar. Of course, this meant that the guitars I would want to buy would cost more than I had to spend! But I looked anyway.

I felt that I should ask my church in Austin, Red River Church, if they would take up an offering for a guitar. I was hoping to raise a few hundred dollars to offset the difference between a pretty good guitar and a very nice guitar. At the end of the service on Sunday, Keith Atkinson explained the situation to the congregation and asked to take up an offering for “Mike’s Guitar Fund.” We set out a little basket. In just a few minutes the church had donated over $1200!!!! Amazing. Thank you, Lord. Wow.

The next day, I went and met with Ray. I told him that I had enough money to buy a nice guitar and told him how much had been given at church. He said, “are you Catholic? Only Catholics can raise that kind of money that quick.” But no, we’re just a small Protestant church. So (this has turned into a long story), I bought a very nice Martin cutaway jumbo with on-board electronics (for you guitar players) that has a sweet, full, even sound. It’s a joy to play, and I am blessed. I will be playing it for orphans and widows.

I say all this to encourage you to walk with God. He has built the world to function much better when we give selflessly, when we consider others first. I have received many blessings from wonderful people who bless in wonderful ways. And their blessings to me overflow into blessings for people here in Russia. It’s the way God works in the world. I am a walking testimony to His goodness and mercy. As I play this guitar I praise God and remember His provision and love. It is a testimony of His kindness.