Here is some news from our church, Street Cry, about one of our members — 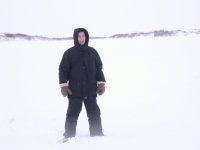 Arkady Ledkov (photo on left) has been part of our church, ministry and staff for a number of years.  Several months ago we sent him out with the laying on of hands to reach the people of his ancestry.

Arkady was born in a small Nenets (a national minority) village of Karataika in the Arkhangelsk region – the far North of Russia beyond the Polar circle.  His people are nomads, their main trades are still reindeer herding and fishing.

Nothing edible grows up there except for wild berries and mushrooms.  The villages are isolated from civilization – there are no roads to reach them.

For food and other bare necessities vendors and government workers travel there from the civilized world by worn out army tanks (in winter when the swampy ground is frozen) and by helicopters in summer (when there is no access by land at all).  Other people can join the expeditions on certain occasions according to special agreements with the food vendors and definitely for a very expensive price.

The closest cities of Vorkuta and Narian Mar are a 46-hour non-stop drive in such a tank away from Arkady’s village, but there are villages that it takes weeks to reach.  In winter the night lasts for several months – the sun does not come up at all.  The temperature goes down to – 50 C degrees.

Alcoholism with the consequent domestic violence, hopelessness, depression and suicidal tendencies run rampant, even among the youth.  By now, Arkady has lost several immediate family members and more than half of his classmates to these vices.

After graduating from his village high school, Arkady came to St. Petersburg to study at the Polar Academy (university).  He majored in economics and was filled with far-reaching ambitions to become a famous man among his small nation.  But God had a different plan!  During one of our dorm evangelisms, the students of our school of ministry met Arkady and shared the Gospel with him.

To make a long story short Arkady dedicated his life to the Lord, and graduated from our school of ministry. At the same time he successfully compled his studies in the Academy and worked for several years as our office administrator, also leading a home group, heading evangelism in our church and teaching in the School of Ministry.

All these years the memories of his homeland and the desperate needs of his native people kept filling his heart and he persistently interceded in prayer with tears and supplications for a chance to bring the Gospel to them.  This year God made a way for Arkady to do it as part of a missionary effort of Canadian brethren.

The team he joined as an interpreter consisted of 4 Canadian missionaries who sponsored the trip, a Russian pastor from the city of Vorkuta and 2 other Christian brothers who took time off of work in a mine in exchange for future overtime work, so they could help with this priject.

Arkady (with a child in the photo on the right) is describing the trip:

“The favor of the villagers was stunning and can be only attributed to God answering prayer.  As we arrived to Karataika we were given radiophones to constantly stay in touch.  The local House of Culture gave us free use of their building and all the equipment they had.  We made our beds on the second floor and used the hall to the full! The governor himself took us in his own vehicle to all the villagers who could not make it to the meetings we conducted so that we could deliver the food presents to them and pray for their needs, healing, etc…

We held meetings for adults showing the Jesus film, sharing our testimonies, preaching the Gospel and doing an altar call. Practically all the villagers attended and more than a 100 gave their hearts to the Lord.

After that, we were invited to the local school and conducted similar meetings for the children.  We showed the kids’ version of the Jesus film and it was very inspiring to see the hunger in their eyes.  Many of them live in tents made of reindeer skins, tending reindeer far away even from the village and do not speak Russian, but only their native Nenets dialect,  but several children served as interpreters among each other explaining who Jesus is and helping to pray the prayer of repentance.

Such a response added boldness to us to smash a local youth idol – a weekly disco dance party that happens in the House of Culture every Saturday and serves a fruitful ground for drunkeness, fights and fornication. 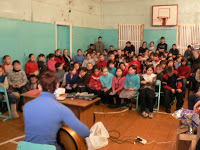 Since we were given complete control over the building and it was our residence, the pastor from Vorkuta proclaimed that he is going to take down the disco party advertising board and conduct a Gospel meeting instead.

I know the local youth and I thought that they would stab the pastor, and I tried to warn him.  But definitely he was led by the Spirit of God because the youth, even though stunned, obediently followed his instructions to take seats in the hall instead of dancing and listened to the Gospel preached.  In addition, we showed a movie about Father’s love and it made the evening.

The elderly Canadian minister leading our team came out and offered a fatherly hug to everybody who wanted.  Surprisingly, one by one the young people responded.  I know it is not a local tradition for a father to hug his children, so for many this vivid picture of the Father’s love brought out tears and healing of the hearts – nobody wanted to leave”.

Arkady returned to St. Petersburg inspired by what the Lord has done, praying for the church to be established in his native village for all those who accepted Christ as their Savior during this evangelistic campaign.  Soon the offer came to him from the director of Karataika village school to fill the need for an English teacher.

Arkady willingly accepted and is now staying in Karataika until June or maybe even longer helping to establish the local church and especially minister to the youth.  Please continue to pray for the fruitfulness of his efforts.

This article is excerpted from the StreetCry Newsletter.  More about the ministry is available at www.streetcry.blogspot.com. Please visit their site and support their work.