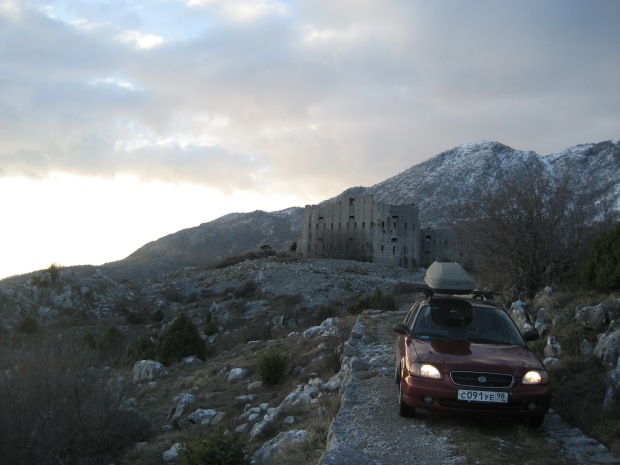 I went for a drive yesterday, in the mountains of Montenegro near the Adriatic coast.

For the past few years I’ve noticed an old fortress on top of a mountain, overlooking the old town of Budva.  I’ve wanted to see it, so I decided to stop and check it out.

It’s off the main road, and I wasn’t sure how to get there.  I just followed what I thought might be the road to it and got lucky.

The road is quite treacherous.  It has never been upgraded or improved; it’s just as it was 170 years ago.  Several times I was concerned that I might cut a tire on the rocks (not to mention fall off the mountain), and that is not a place I’d want to have a flat tire (or fall off a mountain).

After some quick research online, I’ve discovered that the fortress is named Kosmac (pronounced koss-match) and was built in the 1840s by the Austro-Hungarian empire marking the border between the empire and Montenegro. It was one of a string of fortresses along the border.

Now it’s falling apart.  A remnant of a long-lost empire.

Here’s a video I made; you can see how it protected the Budva riviera.