It’s remarkable to me how many of these themes continue to affect Russia, 150 years later. 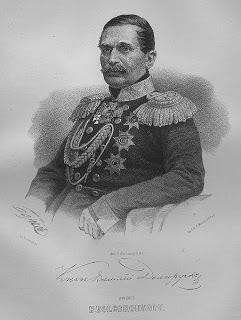 Since 1827, The Third Section of His Imperial Majesty’s Own Chancellery produced special reports for the tsar, describing the moral and political situation in the Russian society. Four years ago, a large share of these reports was published by the Russian State Archive. Below are some short excerpts from the report summarizing the events of 1860, 150 years ago. Five years had passed since the coronation of Alexander II and only one year remained till the most important act of liberalism in Russia in 19th century (the last three words were, probably, not necessary).

Moral and political review of 1860

For thirty years already, the aggregations of political emigrants in England, France, Belgium and Switzerland have constituted the source of all destructive projects in Europe. The revolutionary propaganda was led by Joseph Mazzini, the tireless advocate of the Italian freedom and the universal republic, in which this dreamer sees the future of the humanity…

The bombs, thrown in 1858 in Paris by Orsini, have proven the extreme danger of the ideas of the emancipation of Italy for the French throne…

Politicians see in the preparations for the popular resistance certain signs of the upcoming merge of the Italian question with the Hungarian, Polish and the Eastern questions. The future may confirm this guess, but it is already clearly seen that the tools chosen for these plans prove their revolutionary and democratic nature.

The Polish emigrants include the expatriates of 1832 and 1848. The former, due to their number and influence, are more important than the latter, who mostly left Poland in young age, because of their inclination to life of leisure, without strict political principles…

According to the directions given in the speech [by Adam Czartoryski], instructions were sent to the Poles in the Tsardom to do nothing till the liberation of peasants […] but that they should make the Polish peasants believe that the Polish aristocrats forced the Tsar to liberate them.

In the meanwhile, the hopes of the Polish emigrants in Paris and in London are based on the events being prepared in Hungary. They plan that either the rebellion in Hungary in which Poles would participate may become useful for their own rebellion, or that the Hungary, reformed by Austria, will provide them with the moral grounds to demand the reformation of Poland.

In 1860, the number of Russians who left their Fatherland and explicitly joined the opposition, has grown. Some of the most important of them are: 1) Prince Peter Dolgorukov, the author of the book titled “La Verite sur la Russie”. Having published the book in Paris, he departed to London, making acquaintance with Herzen and Ogarev. As far as we know, his book was recognized abroad as malicious vilification of the all Russian state and the ruling Dynasty and damaged his reputation among people of reason…

2) Prince Yuri Golitsyn, who fled from Russia due to the being justly punished for the improper correspondence withe Herzen. Because of his narrow-mindedness, he could not succeed in literature and has to earn his living by giving concerts in London and other cities…

3) Someone Kisleyev or Kisteltsev, young man in the age of 28, who calls himself doctor of medicine, while others think he is a clergyman… On 17 [29] November, on the day of anniversary of Polish revolution, Kisleyev was present on the meeting and spoke in favor of revolution.

4) Hierodeacon Agapy, who broke with the archimandrite and fled to London.

All mentioned above have joined the circle of Herzen and Ogarev, who continue their maleficent publications. According to secret information, there are other Russian citizens who did not proclaim their animosity towards the legitimate government but do participate in revolutionary projects. So, it is known that two Russians, retired officer Dietmars and retired state official Mechnikov, fought in the army of Garibaldi.

The constitutional rights of the Great Duchy of Poznan give their citizens right to advocate patriotic feelings in public, while promoting hatred to all things German… The government views it forbearingly, as if being afraid of decisive measures. While the Poznan Poles made no rebellious actions in this year, they took every opportunity to prepare the population for such rebellions. Their main weapon in this year was the accusation of police by deputy Niegolewski (probably, Władysław Niegolewski. DM), who suggested that the police was responsible for the sending of fake proclamations, putting Poles on political actions… On the other hand, the demands to allow usage of Polish language in courts never stopped. There were occasions when the prisoners refused to reply in German, pretending they do not understand.

The patriotic sentiments were strongest among university students in Krakow, who demanded the lectures in Polish to be allowed by sending the deputy to Vienna, who beat the education inspector who tried to keep them inside the university to prevent demonstrations, who sang the songs from the 1830 rebellion during morning walks and often met in on of the city caffees. An anonymous letter was received, reporting that the students formed a secret society during these meetings. Investigations are underway. Among the people involved in the society, the most important seems to be the retired lieutenant of the Russian army Narcyz Jankowski (Link in Polish. DM) who was mentioned in the letter. In September, Jankowski was arrested on the border and delivered to Krakow.

Lieutenant Jankowski, son of a landlord from Kiev region, retired in 1857. For 3 years he lived in Warsaw, making acquaintances and hosting meetings with public book readings. During the arrest, Jankowski managed to destroy some papers. Among the papers found in his apartment were draft program of a Polish democratic committee in Paris, instruction to the secret societies to begin armed rebellion all over Poland and a note saying that 100 brochures of “Przeglad rzeczy polskich” were given to him to deliver to Warsaw

In December, a Polish review printed in Paris (Przeglad rzeczy polskich) published and article, where the author mentions the May demonstration in Krakow university and states that the Polish autonomy will be attained by the youth, and offers the younger readers to deepen their patriotic feelings, even though they have already been reproved by many older Polish authoritative thinkers.

The governor of the Polish Kingdom has reported that the Poznan police informed him of the arrival of a Polish emissary Lisecki to the Great Duchy of Poznan. He distributed inciting brochures and pretended he was sent by Miroslawski to investigate the chances of beginning a mutiny in Poznan or in Poland… From a letter sent on February 14 from Paris, it is known that the real name of Lisecki, a.k.a. Gnatowski, was Arthur Trok.

According to the news from the Kingdom, the Poles there sympathize the events in Sicily and Naples, the national movement in Hungary and Galicia, but remain calm, while awaiting for advantageous changes in the politics. In the meanwhile, they chose to assist the growth of the nation: enhancing the morality of the lower classes by fighting alcoholism and by attracting them to the churches; establishment of municipal banks to liberate the agriculture, especially from the destructive influence of the Jews and to enhance the arable farming. The primary instrument for this was the Farming society, established in 1859, which has grown immensely and established contacts with similar societies in Poznan and Galicia. Very soon the Farmin society started showin signs of maleficent for the monarchy political influence in the Polish Kingdom. So, it deemed necessary to close the provincial departments of the society, preserving the central department in Warsaw. This measure, though, produced dissatisfaction among Poles.

(This chapter also described the unrest among Poles in other regions of Russia, including Vilno (modern Vilnius) and Kiev. DM).

In Finland, a secret society was formed of the people, who write for Swedish newspapers articles hostile to Russia, trying to incite Finns against her rule, especially the younger Finns, among whom destructive ideas were found in the Helsingfors University. These feelings were noted by Swedish politicians who find them useful for their goals. In the end of 1859 Dahlfeld was appointed the Swedish consul in Helsingfors. He made acquaintances among lesser writers, who are his instrument to spread ideas hostile to Russia. British and American consuls cooperated.

In 1860, just like in the previous three years, the most important matter of the Russian politics was the liberation of landlord-owned peasants from serfdom. It was expected that the question will be solved by the end of 1860, but in spite of the efforts of the government, it was impossible… Nobody, though, could underestimate the high moral and political goal represented by the liberation. The full freedom in the discussion, allowed by Your Majesty, helped the detailed investigation of all possibilities. Measures were taken to mitigate unrest when the decrees of Your Majesty were being published, and the measures gave positive results.

In the Baltic regions, where the aristocracy has exclusive rights to own the land they were afraid that their privileges may be violated during the liberation of peasants and that the peasants will have equal rights during the elections.

A part of peasants in the Baltic regions (mostly in Lifland and Estland) expressed their desire to move to new lands in Samara region. In spite of the resistance of some landlords, 400 peasants have moved.

In Crimea, a large number of Crimean Tatars have moved to Turkey this year. This resettlement threatens the landowners of the Crimean peninsula who might not have enough workers to continue cultivating their land. The aristocrats of Crimea gathered in Simpheropol to discuss possible replacement for the lost workforce and the introduction of new machines.

Together with the government’s intentions to alleviate the life of peasants, certain private efforts took place in 1860. Mostly, by establishment of sunday schools and temperance associations.

Unnaturally fast growth of temperance associations in 1859 was explained by the rage of the lower classes against liquor stores owners. As soon as measures were taken to prevent violent actions, the growth stopped.

Sunday schools are getting extremely popular and the local education authorities are instructed to pay special attention to prevent dissemination of harmful teachings.

All credit institutions have been merged in one State Bank. It is too soon to make any conclusion on the effect of this measure, but the first impression of the merchants was that the activity of the new bank is limited by the responsibility and insufficient capital.

On the internal political state of the Empire

To conclude the report, we have to note that the spirit of the people of the Empire strives for the growth of the civil rights on modern liberal ground. These views are expressed in magazines, where, in spite of the efforts of the censorship, very often too liberal and even dangerous views are found. The liberal journalism incites the intellectual ferment and helps the illegally imported revolutionary magazines, directed against the existing state and monarchy. What is true for other countries, should be true for Russia: the unrestrained freedom of press is the greatest danger for the existing state, but the press can also be the best instrument in the hands of the government.

Besides the love towards liberal establishments, the dreams of restoration of independency of separate nations have also made their way into Russia. These dreams are insecure for the multinational Russian Empire. They can be observed not only in the Western districts, but also in Little Russia and Finland. The modern politics of the West gives more grounds to these dreams, especially to those of Poles, whose loyalty even earlier was doubtful.