Many of you have by now heard our big news: we are guardians of a three year old orphan named Valerie. She came to live with us last Tuesday evening. She’s doing great as she gets settled in to her new life with us.

We have just entered a brand new phase of our lives, and it will take time for all three of us to adjust and settle into our ‘new normal’. It still feels a little unreal, like we are in a dream, we are having a crash course in parenting. Please, pray for us to go through this transition smoothly.

This update will fill in some of the blanks about Valerie, her mother, and our relationship to them.

First, Valerie is a ‘social orphan’. That is, she has a living mother but her mother is in prison and is losing her parental rights. Her mother used to live with us.

In 2003, we became guardians of a teenage orphan named Oksana (left, in front with Olga, Olga’s sister and mom, and our then-new cat Miki; July 2003). Olga had met Oksana in a summer camp several years before and was like a big sister to her and became like a mother.

Oksana lived with us for about 18 months, until her 18th birthday. She then decided to leave our home and pursue her own direction.

Oksana started living a destructive lifestyle. As the years passed, she was distant from us though we tried several times in many ways to help her. She would contact us once in a while, and then fall out of the radar again. She had several live-in boy friends and got involved in dealing and taking drugs. As a result, she contracted HIV and Hepatitis C.

Three and a half years ago she gave birth to Valerie (before getting HIV and Hep-C, so Valerie is healthy). The picture at right is of a visit we had with them in September 2008. We know who the father is, but there is no father listed on the birth certificate; he’s not been involved in their lives since before the birth. Valerie has been fatherless, just as Oksana had been fatherless most of her childhood.

A year ago, Oskana wanted Valerie to be baptized in the Orthodox church. She asked Olga to be Valerie’s godmother. We attended the baptism and had a good day together. Here they are at left on the day of the baptism, September 2009.

Earlier this year, Oksana was put in prison for dealing drugs; she has almost four years left on her sentence. Valerie was placed in Baby Orphanage #7 in St. Petersburg.

Last Tuesday, we picked up Valerie from the orphanage and brought her home to live with us. Valerie is a smart little girl; she really likes books and likes to draw. It’s fun to hear her padding down the hall, talking and enjoying herself.

Right now she’s on her good behavior, and we’ve read several books and articles that tell us to expect a time with she’ll stop holding back and start ‘being herself’, pushing against boundaries, asserting herself. So, we know we’re in the honeymoon phase right now. Though yesterday we had a glimpse of her, uhmmmm, ‘strong personality’. 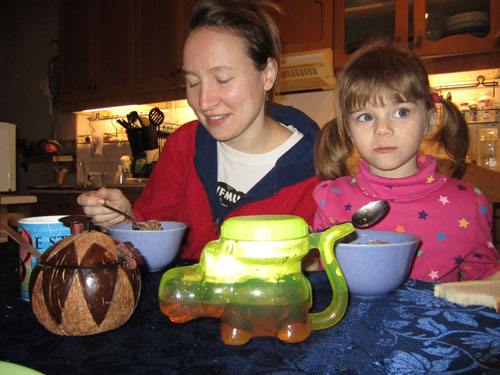 At first, she didn’t really know how to interact with Mike. She would point to a picture of him and call him Papa, but she’s been shy in person. She is loosening up as the days pass.

We continue to be in contact with Oksana. Olga visits her in the prison as much as possible, and we send care packages to her (clothing, food, etc; the prison does not provide very much for her).

We decided to get guardianship (foster care) first, since it can be done much more quickly and does not involve going to court. We will probably pursue adoption. The government has applied to remove Oksana’s parental rights. We’re not sure what Oksana’s reaction will be to her losing her parental rights and to us possibly adopting Valerie. We’re praying for, and trust that we’ll have, wisdom about this as time passes.

We are very happy for the things the Lord has done in our lives, and we know that He will lead us further on. Please pray for Oksana, as it looks like she has not really changed her way of thinking about her life-style.

Violeta Pavetic, our sister-in-law in Montenegro recently sent this scripture, which is a good one to meditate on as we all enter a new year and as Valerie enters a new life: 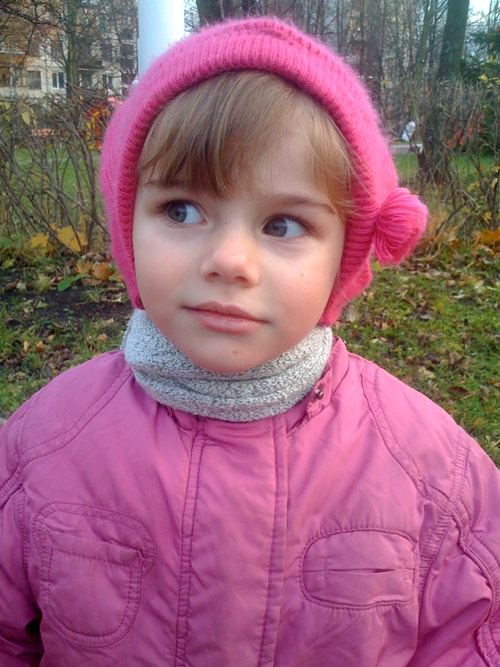 This is what the Lord says — he who made a way through the sea, a path through the mighty waters:

“Forget the former things; do not dwell on the past.

See, I am doing a new thing

Now it springs up; do you not perceive it?

I am making a way in the desert

and streams in the wasteland.”

5 thoughts on “An Update from Russia — About Valerie”